Traditions are an essential element of every culture. Merriam-Webster defines the term as “the handing down of information, beliefs, and customs by word of mouth or by example from one generation to another without written instruction.” Stories, in other words. But not just spoken, as humans are prone to create celebrations based on these stories. Such is the case with Pride Month.

The Christopher Street Liberation Day March took place on Sunday, June 28, 1970, one year after the Stonewall Uprising, and provided the sparks that would ultimately ignite the LGBTQ+ movement for equality. In subsequent years gay pride marches and parades would spread to cities across the United States and throughout the globe. The number of events continued to increase rapidly, and in 1999 President Bill Clinton declared June as “Gay & Lesbian Pride Month.”

The modern version of Pride events are largely celebratory, but a remembrance of those who lost their lives to the AIDS epidemic remains a solemn component. Some five decades later, the month of June 2020 has become a focal point for many others whose lives tragically ended before their time, as COVID-19 deaths approach half a million and protesters take to the streets with voices raised in support of Black Lives Matter, protesting to eliminate extreme police violence.

With Pride events cancelled this year due to the virus, it felt as though origin stories which were threads of the tradition would fail to find a public voice. But last week The Kitchen Sisters broadcast an insightful podcast episode that told one of these stories – 95,000 Names: Gert McMullin, Sewing the Frontline. 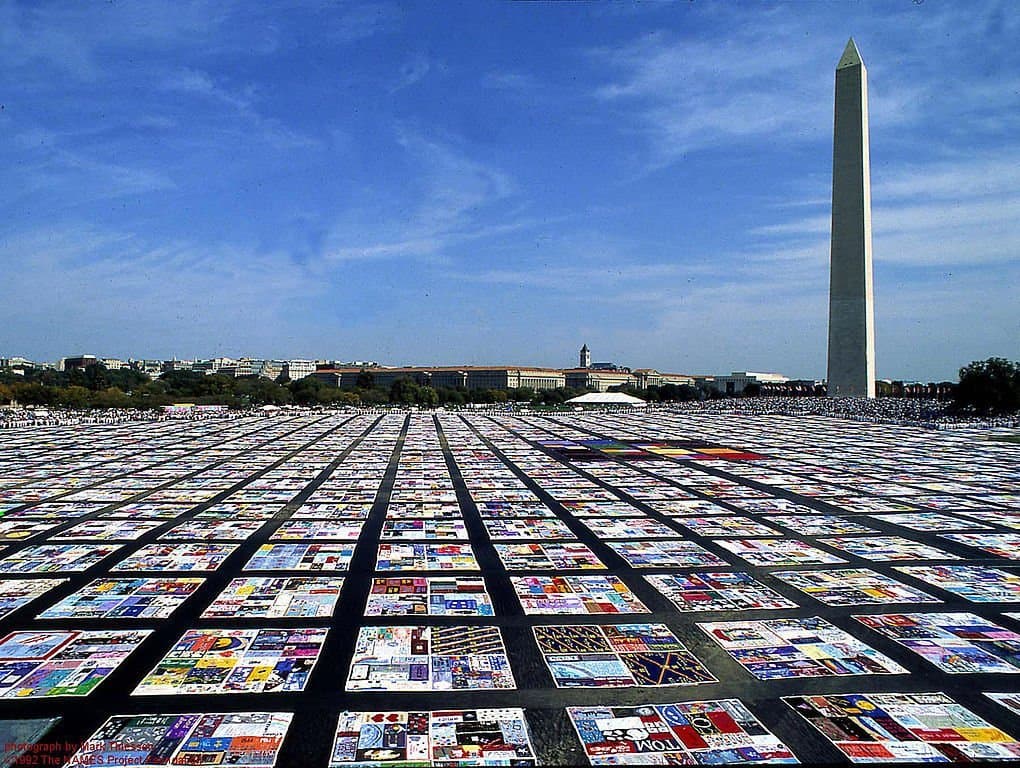 As with any tradition, the efforts of many people comprise the narrative threads, yet most contributors remain behind the scenes and their story fades over time. Thankfully, the story of Gert McMullin lives on.

In 1985, Gert McMullin was one of the first San Franciscans to put a stitch on the AIDS Quilt, the quilt that began with one memorial square in honor of a man who had died of AIDS, and that now holds some 95,000 names. Gert never planned it this way, but over the decades she has become the Keeper of the Quilt and has stewarded it, repaired it, tended it, traveled with it and conserved it for some 33 years now. Gert knows the power of sewing.

A beautiful story that spans decades, connects two pandemics, and exemplifies the generosity of humans who pour their heart into the lives of strangers.

In 2020, when COVID-19 hit, Gert was one of the first Bay Area citizens to begin sewing masks – PPE for nurses and health care workers who were lacking proper protection – masks she makes from fabric left over from the making of the AIDS Quilt. The comfort, outrage and honoring of an earlier pandemic being used to protect people from a new one.

As I reflect on the month of June 2020 I’m most grateful for the many traditions seeking equality across racial, gender, and sexual boundaries – boundaries that are false, yet harmful constructs born of discrimination. The question at hand is how our personal narratives can be allies to such noble endeavors. How indeed.