Storytelling with Impact explores the art of storytelling from the perspective that the stories we tell can impact the lives of others, and in doing so, impact society as a whole. We’re now experiencing a storytelling renaissance in response to, and supported by, digital media.

Live talks, as well as recorded videos & podcasts, present a continuous stream of personal narratives and heartfelt stories. So if you want your story to stand out, to resonate, and to matter to your listeners, your narrative needs to be crafted in a way that imparts deep meaning, and delivered with passion… with impact. 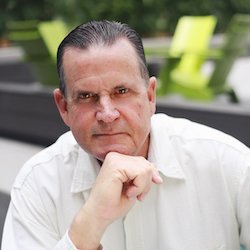 From a very young age I was drawn to the art of storytelling. From old radio dramas such as The New Adventures of Sherlock Holmes, The Green Hornet, The Shadow, and Dr Jekyll and Mr Hyde, to hardboiled novels by Dashiell Hammett, James M. Cain and Raymond Chandler, as well as cold war spy stories from John le Carré, Graham Greene, and Robert Ludlum.

After 30+ years in the corporate world, telling business-based stories, it was time to change.

I first heard about the TED Conference in 2008, which means I was late to the game, as the first TED Conference had been held in 1984. I found the storytelling format compelling, and TED’s proposal of Ideas Worth Spreading resonated. This was a unique way to reach millions of people with ideas that strained the status quo, and presented an opportunity to expand / change / challenge perspectives in under 18 minutes.

In early 2013 the organizers of TEDxSanDiego & TEDxTijuana met to discuss the concept of creating an event that would span the U.S. / Mexico border. It took two and a half years of planning, but on September 4, 2015 TEDxMonumento258 was the world’s first bi-national TEDx event with a stage in Mexico, a stage in the United States, with just a border fence in between, and speakers alternating between the two.

In 2017 I was invited to co-organize TEDxDonovanCorrectional – a TEDx event in prison in which half the speakers were from the outside, and half were inmates. The audience was similarly split, half inmates, half outsiders, with everyone sitting together at the talks, and while eating lunch together afterwards in the prison culinary. In 2018 I continued on as a speaker coach, working with a new group of inmates.

Which brings us to 2019, a time when it felt as though the voices of tomorrows leaders needed to be heard, and so TEDxYouth@SanDiego came to be, with 13 speakers and 3 performances, all San Diego area high school students.

While producing TEDx events has been a defining factor in my storytelling journey, the learning process extended to visiting other TED/TEDx events. To date I’ve attended 80+ amazing events in cities such as Los Angeles, New York, London & Berlin, and had the pleasure of watching 1,500+ speakers take the stage with their ideas worth spreading.

The advent of digital technology, from podcasts to blogs to video sharing sites, has altered storytelling opportunities in a most profound way. That’s not to say it has replaced human connection. Quite the opposite, as it has served to support live narrative events (The Moth, The Narrators) and conferences (TED/TEDx, PopTech) in which ideas & wisdom are shared.

My speaker coaching, storytelling workshops, and the class I teach at UCSD Extension are based on the principals of storytelling with impact, where speakers are taken through the process of uncovering their message (ideation), and then developing a powerful narrative (narration), as well as delivering their story on stage (presentation).

Are you ready to tell your story with impact?