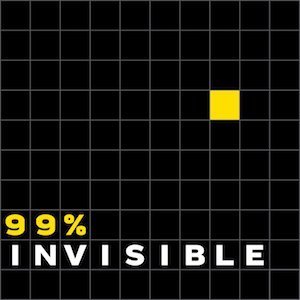 99% Invisible was originally produced by host Roman Mars from his bedroom. As the show garnered praise from all corners of the creative world, and built a loyal following of regular listeners, Roman moved production of the show to a studio behind his house, as well as an Oakland based office which is shared with 99pi’s amazing staff.

The show’s name is taken from a quote by Buckminster Fuller: “Ninety-nine percent of who you are is invisible and untouchable.”, and its success is due in large part to the way in which the stories take you behind the scenes, both physically and chronologically, to delve into the hidden world of architecture, urban design, society and technology, magically transporting a listener to another time and location.

Roman introduces the shows topic, most often with a touch of mystery that sets the hook, and follows with one or more interviews that reveal the story step-by-step and explain its historical significance. The real beauty is in the way these stories change your perception of the present, and your understanding of the designed world around you.